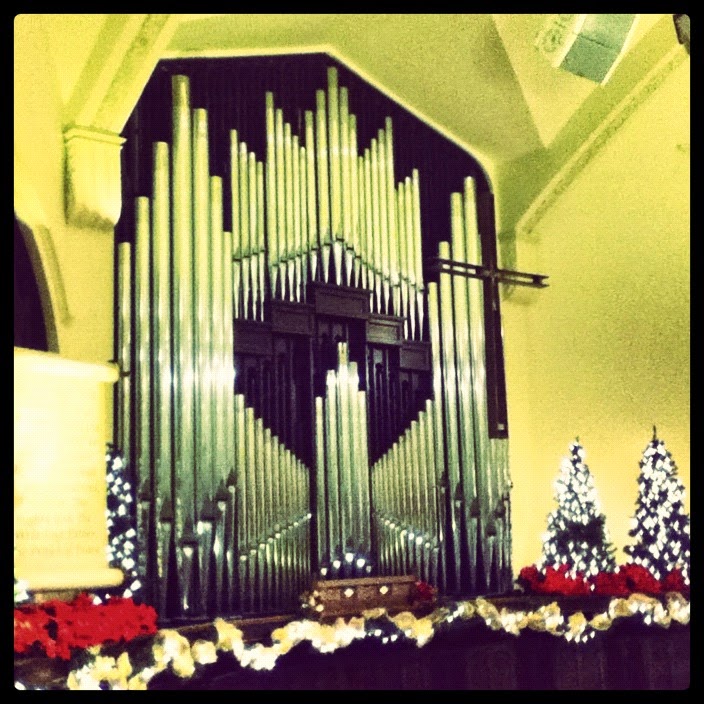 I always love to read the first few chapters of The Desire of Ages, especially at Christmastime. It's neat because it doesn't begin right with the Christmas story, but starts at the very beginning of time, and how the whole thing came about. It gives a behind-the-scenes look at Jesus' birth; a beautiful perspective on why He came.

For more than a thousand years the Jewish people had awaited the Saviour's coming. Upon this event they had rested their brightest hopes. In song and prophecy, in temple rite and household prayer, they had enshrined His name. And yet at His coming they knew Him not. The Beloved of heaven was to them "as a root out of a dry ground;" He had "no form nor comeliness;" and they saw in Him no beauty that they should desire Him. "He came unto His own, and His own received Him not." Isaiah 53:2; John 1:11.  {DA 27.1}

Yet God had chosen Israel. He had called them to preserve among men the knowledge of His law, and of the symbols and prophecies that pointed to the Saviour. He desired them to be as wells of salvation to the world. What Abraham was in the land of his sojourn, what Joseph was in Egypt, and Daniel in the courts of Babylon, the Hebrew people were to be among the nations. They were to reveal God to men.

In the call of Abraham the Lord had said, "I will bless thee; . . . and thou shalt be a blessing: . . . and in thee shall all families of the earth be blessed." Genesis 12:2, 3. The same teaching was repeated through the prophets. Even after Israel had been wasted by war and captivity, the promise was theirs, "The remnant of Jacob shall be in the midst of many people as a dew from the Lord, as the showers upon the grass, that tarrieth not for man, nor waiteth for the sons of men." Micah 5:7. Concerning the temple at Jerusalem, the Lord declared through Isaiah, "Mine house shall be called an house of prayer for all peoples." Isaiah 56:7.

But the Israelites fixed their hopes upon worldly greatness. From the time of their entrance to the land of Canaan, they departed from the commandments of God, and followed the ways of the heathen. It was in vain that God sent them warning by His prophets. In vain they suffered the chastisement of heathen oppression. Every reformation was followed by deeper apostasy.

Had Israel been true to God, He could have accomplished His purpose through their honor and exaltation. If they had walked in the ways of obedience, He would have made them "high above all nations which He hath made, in praise, and in name, and in honor." "All people of the earth," said Moses, "shall see that thou art called by the name of the Lord; and they shall be afraid of thee." "The nations which shall hear all these statutes" shall say, "Surely this great nation is a wise and understanding people." Deuteronomy 26:19;  28:10; Deuteronomy 4:6. But because of their unfaithfulness, God's purpose could be wrought out only through continued adversity and humiliation.

They were brought into subjection to Babylon, and scattered through the lands of the heathen. In affliction many renewed their faithfulness to His covenant. While they hung their harps upon the willows, and mourned for the holy temple that was laid waste, the light of truth shone out through them, and a knowledge of God was spread among the nations. The heathen systems of sacrifice were a perversion of the system that God had appointed; and many a sincere observer of heathen rites learned from the Hebrews the meaning of the service divinely ordained, and in faith grasped the promise of a Redeemer.

Many of the exiles suffered persecution. Not a few lost their lives because of their refusal to disregard the Sabbath and to observe the heathen festivals. As idolaters were roused to crush out the truth, the Lord brought His servants face to face with kings and rulers, that they and their people might receive the light. Time after time the greatest monarchs were led to proclaim the supremacy of the God whom their Hebrew captives worshiped.

By the Babylonish captivity the Israelites were effectually cured of the worship of graven images. During the centuries that followed, they suffered from the oppression of heathen foes, until the conviction became fixed that their prosperity depended upon their obedience to the law of God. But with too many of the people obedience was not prompted by love. The motive was selfish. They rendered outward service to God as the means of attaining to national greatness. They did not become the light of the world, but shut themselves away from the world in order to escape temptation to idolatry. In the instruction given through Moses, God had placed restrictions upon their association with idolaters; but this teaching had been misinterpreted. It was intended to prevent them from conforming to the practices of the heathen. But it was used to build up a wall of separation between Israel and all other nations. The Jews looked upon Jerusalem as their heaven, and they were actually jealous lest the Lord should show mercy to the Gentiles.

After the return from Babylon, much attention was given to religious instruction. All over the country, synagogues were erected, where the law was expounded by the priests and scribes. And schools were established, which, together with the arts and sciences, professed to teach the principles of righteousness. But these agencies became corrupted. During the captivity, many of the people had received heathen ideas and customs, and these were brought into their religious service. In many things they conformed to the practices of idolaters.

As they departed from God, the Jews in a great degree lost sight of the teaching of the ritual service. That service had been instituted by Christ Himself. In every part it was a symbol of Him; and it had been full of vitality and spiritual beauty. But the Jews lost the spiritual life from their ceremonies, and clung to the dead forms. They trusted to the sacrifices and ordinances themselves, instead of resting upon Him to whom they pointed. In order to supply the place of that which they had lost, the priests and rabbis multiplied requirements of their own; and the more rigid they grew, the less of the love of God was manifested. They measured their holiness by the multitude of their ceremonies, while their hearts were filled with pride and hypocrisy.

With all their minute and burdensome injunctions, it was an impossibility to keep the law. Those who desired to serve God, and who tried to observe the rabbinical precepts, toiled under a heavy burden. They could find no rest from the accusings of a troubled conscience. Thus Satan worked to discourage the people, to lower their conception of the character of God, and to bring the faith of Israel into contempt. He hoped to establish the claim put forth when he rebelled in heaven,--that the requirements of God were unjust, and could not be obeyed. Even Israel, he declared, did not keep the law.

While the Jews desired the advent of the Messiah, they had no true conception of His mission. They did not seek redemption from sin, but deliverance from the Romans. They looked for the Messiah to come as a conqueror, to break the oppressor's power, and exalt Israel to universal dominion. Thus the way was prepared for them to reject the Saviour.

At the time of the birth of Christ the nation was chafing under the rule of her foreign masters, and racked with internal strife. The Jews had been permitted to maintain the form of a separate government; but nothing could disguise the fact that they were under the Roman yoke, or reconcile them to the restriction of their power. The Romans claimed the right of appointing and removing the high priest, and the office was often secured by fraud, bribery, and even murder. Thus the priesthood became more and more corrupt. Yet the priests still possessed great power, and they employed it for selfish and mercenary ends. The people were subjected to their merciless demands, and were also heavily taxed by the Romans. This state of affairs caused widespread discontent. Popular outbreaks were frequent. Greed and violence, distrust and spiritual apathy, were eating out the very heart of the nation.

Hatred of the Romans, and national and spiritual pride, led the Jews still to adhere rigorously to their forms of worship. The priests tried to maintain a reputation for sanctity by scrupulous attention to the ceremonies of religion. The people, in their darkness and oppression, and the rulers, thirsting for power, longed for the coming of One who would vanquish their enemies and restore the kingdom to Israel. They had studied the prophecies, but without spiritual insight. Thus they overlooked those scriptures that point to the humiliation of Christ's first advent, and misapplied those that speak of the glory of His second coming. Pride obscured their vision. They interpreted prophecy in accordance with their selfish desires.