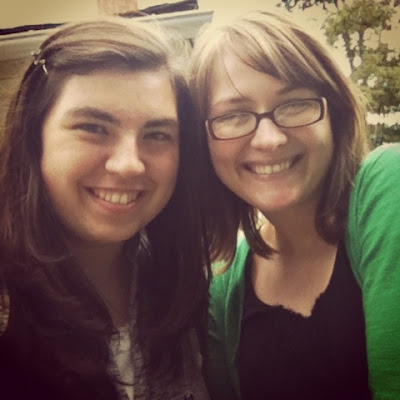 It's been a theme for the last month.

My first day in Michigan, I met two new people. The next day at church, several more. On Sunday, all of us SM-trainees met each other. And since then, I've met several others through church, shopping, Crucible...

I wasn't feeling the most amazing today, but sometime this afternoon I found out that a trip to the mall was in the making. Our assignment? Simply to meet new people. I wasn't thrilled at first since I wasn't feeling great, and considered just staying back, but I decided I'd give it a go (and everyone else was going anyway).

For whatever reason, I wasn't really that worried about it. I found myself actually kind of looking forward to spying out people I could talk to. We got to the mall, and I headed in my own direction.

First, I headed to a necessary stop - the bathroom. I prayed that God would give me someone to talk to. I went in, and there was a lady changing her little girl's diaper. I chatted with her just a little - asked how old the little girl was (14 months) and the little girl's name (London - I love it!). Conversation ended; she didn't seem interested to continue.

Next, I headed down that wing of the mall and tried to see if I could spark a conversation with anyone somehow. I stopped in at Claire's and talked to the clerk about some hair clips, but that didn't go anywhere. I noticed a kiosk that had all sorts of wedding trinkets (since I have so many friends getting married these days), and tried to look interested in the objects there, but the salesman was busy with someone else so he didn't pay any attention to me. OK, well that's not working... on down the tile pathway.

As I neared another kiosk, a man popped out at me. It rather surprised me, but he was happy and obviously wanted my attention. His was the RC helicopters stand. My brother Kenny loves RC stuff, so I agreed for him to show me how his stuff worked - I figured that could be a conversation-starter as well. He showed me how the controls worked, and let me have a try (it was fun! but I crashed a few times, oops). I tried to get him talking about the other types of stuff he flew, etc. but he was mostly interested in me buying something he had, so that didn't go too far. I debated whether I should try and weasel my way out of the conversation or just let him talk and see if I could make any more personal contact. About that time, another guy came up and started talking with the salesman. He was just browsing too, but he seemed quite interested in the RC stuff. I mentioned to him that my brother likes the stuff and what he's done, and the conversation went from there. Somehow I found out that he's from Colorado, so I told him I'm from Washington. Of course we wondered why the other person was in Indiana (where the mall was) and so we each shared. I told him I was in Michigan getting training to go overseas and teach in a school. Through that, I found out that he is from Pakistan - moved here when he was 11. Anyway, we continued talking and his mother and cousins came up a little later and he introduced me to them. I ended up leaving soon after, but it was wonderful to make a new friend. (the salesman was kind too, so I added him to my list of people I'd met)

The last person I met was Mindy. She was in a store with all sorts of neat gadgets, and she was on her break, sitting in the massage chair, obviously enjoying herself. I didn't have a whole lot of time to chat with her, but I found out a few things about her as well. She told me she carried most of her stress in her shoulders, which was why the massage chair was so amazing. Her boyfriend gave her massages but the chair was definitely a competition with that. I told her that I have shoulder-aches often too, and about how one of my friends had given me an amazing massage just this morning. (thanks Keirsta!!) Just a little bit of small talk, but she seemed like a neat person. Friendly, and even though she was a clerk, she wasn't trying to sell me anything. :-)

I loved this chance I had to just meet people. How different my trips to the mall would be if this were my goal every time! (Isn't that what we're supposed to do anyway?) So many people really don't actually want to talk, but there are some who will - and some who are extremely open (as demonstrated in another girl that some of my friends were able to meet). I don't have to go as deep as a spiritual conversation if that doesn't come up right away - I'm simply making a friend.

I'm making it my goal to keep an eye open constantly for conversation opportunities - to make friends. How about you?

*I wrote this last night.
Posted by Unknown at 9:43 AM