On my way back up to my creekside office from Earth Lodge, I often stop at the rock garden, which records campers and counselors from years gone by at Young Disciple Youth Bible Camp. It's a lot of fun to examine the jumbled array of faded names, years, and creativity. Each one prompts a memory of the person it represents. 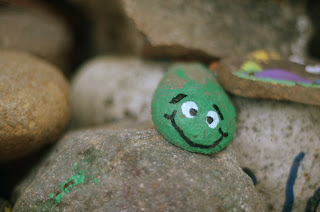 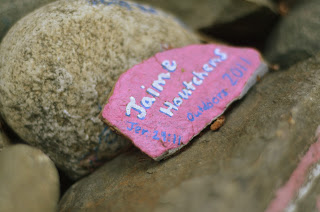 But when I walked by the other day, a different realization hit me. As I looked over the rocks, it dawned on me...

Each rock stands for one young person whose life has been influenced in some way or another by the camp(s) they attended.

It's not just a few rocks, either. There's a whole pile. Think about it: a minimum of 60 campers per week (usually many more than that). Multiply that by the number of camps held at YD since moving to Washington in 1999 (at least 24 if not more). It adds up!

These campers have left their mark at YD, but YD has left its mark on their hearts. And they will never be the same. God spoke to them at camp, and whether they listened or not, they were pointed toward the goal of establishing a living relationship with Jesus. It's our prayer that they will follow after that goal!

In just five days, counselors will arrive to begin orientation, to learn how to reach the hearts of their campers and draw them to Jesus. Pray that they will be able to consecrate their minds and hearts to God so He can use them to change lives.

Pray for the campers. Pray that their hearts will be touched by the words, the actions, the sights, the sounds, the messages of YD Camp. Pray that they won't pass up the opportunity to learn how to live a true, happy, and fulfilled Christian life.

Just pretty rocks? Not at all. They're so much more. And I want to be a part of the influence for eternity!